Paddling in the Everglades in the 1980’s

Hi.  My name is Ron Haines.  I was born and raised in Illinois and have lived in Ethiopia, Iowa and Florida, the latter since 1976.

After a journalism degree from the University of Illinois I joined the Peace Corps and spent three years in Ethiopia and then another year traveling from India back to Europe by land before heading back to the U.S.

Apart from a four-year stint at the Quad-City Times in Davenport, Iowa, my professional life has been in the tabloids, the National Enquirer, The Globe and The Star.  The National Enquirer brought me to Florida in 1976 and I was privileged to be there, as a reporter and as a photo assignment editor, in the boom years of six million plus in sales per week with Generoso Pope at the helm.

I resigned from the Enquirer in the early 1980’s to spend time at home with my daughter while my wife worked.  It was pretty unusual back then to leave a high-paying, high-pressure Enquirer job of one’s own accord. The norm was that the folks who left were fired, usually on Fridays. 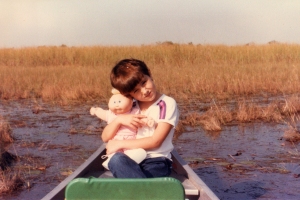 Daughter Jennifer in the Everglades in the 1980’s

I never regretted my decision.   I think it made for a better relationship with my daughter over the long haul than there would have been without that time together.

By 1984 my wife was ready to stay home and I was ready to find a job again.  The editorial offices of the Globe, owned by Canadian Mike Rosenbloom, had been moved to southeast Florida “to take advantage of the vast pool of tabloid talent” in the area (mainly those fired by the Enquirer through the years), according to Editor Mike Nevard.  Globe’s photo editor, Alistair Duncan, had just decamped for Rupert Murdoch’s competing Star in Tarrytown, NY, and I walked through the door.

By late 1985 I had a company cell phone to keep up with the 24/7 job I had walked into.  That became my life for the next couple of decades.  Along the way, because I could be mobile with the cell phone, I volunteered for Girl Scout activities and high school activities with my daughter and continued my double life as a very active volunteer with the Sierra Club.  I orchestrated many a celebrity photo stakeout in Los Angeles from a tent in the woods in Florida in those days.

In 2001, after Globe, Star and National Enquirer were all under the control of highly-leveredged American Media, I lived through the anthrax attack on our building in Boca Raton, but lost a good friend, Bob Stevens.  The tabloid world became increasingly very corporate and accountant-driven, quite different from what it had been when each of the three, then-debt-free titles was owned by a single wealthy person (Pope, Rosenbloom and Murdoch) and the competition was fierce.  After a period way too close to the corporate flame, I was let go in 2003 when the Star was moved from Florida to New York, minus its employees, and took the opportunity of having acres of free time and a severance package to canoe the Mississippi River.

After returning to Florida I was asked to work part-time for the British edition of The National Enquirer, clearing photo copyrights for use in the UK.  It fit my needs and I was happy for the work.

In 2006, the Great Stupid National Enquirer Experiment, which involved firing its Florida staff and moving it to New York with a new staff of British hires, was deemed a failure (who knew?) and came to an inglorious end after a year.  The Brits were let go, the paper moved back to Florida and some old hands rehired.  I was one of them.

I thoroughly enjoyed rejoining many of the people I had worked with and knew from years past and it was difficult for me to make the decision to finally stop working.

But hey, I wasn’t getting any younger and I felt for a long time that I needed to document some of the personal stuff I did in my life for my family and interested friends.  Having a job was for too long a way too convenient excuse for not doing any of that.  April 6, 2011 was my last day of work.

Since then I have fully documented the Mississippi River trip, posted my letters home from the Peace Corps years, and had a 50-year reunion with Addis Ababa, Ethiopia, accompanied by daughter Jennifer. I have also traveled extensively by car across the United States and continue to use my blog to record much of what I encounter in my journeys.

I hope you enjoy this.  Use the subscribe button on the right to stay in touch.

25 Responses to About Me

Horses, Life, A Touch of Geek

I love a person, it's people I can't stand

Hear it straight from a self published author: A new post every Saturday!

That did not go as expected. And that's all right.

The chronicle of a lifelong canoe journey to New Orleans

The Urge to be Someplace Else

Fitness, Adventure and Art on the High Seas!

The True Story of What Was

News for those who served with the Peace Corps in Eritrea and Ethiopia.